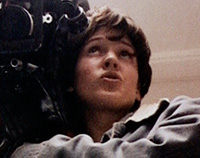 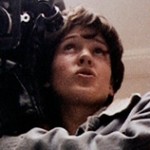 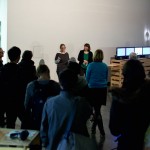 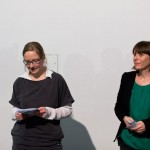 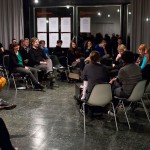 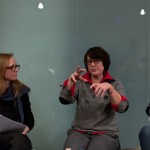 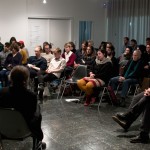 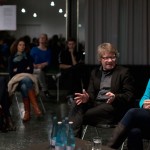 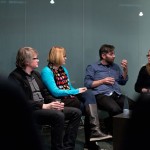 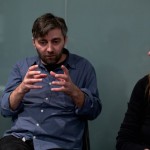 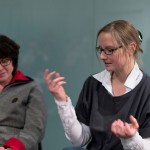 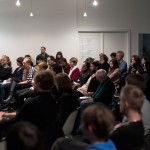 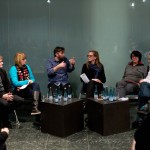 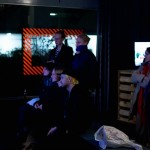 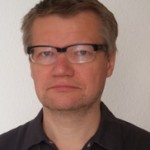 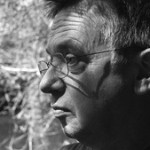 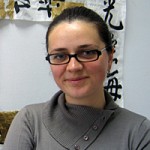 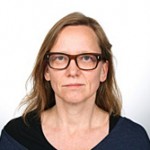 T]he exhibit will display the artistic works of students from Berlin and Sarajevo based on the theme “Limited Space: Berlin / Sarajevo,” and will deal with the historic common ground of Berlin and Sarajevo and the continuing far-reaching social, economic and political implications of the limitation of space.

A panel of invited guests will reflect on and examine the theme, taking into account varying backgrounds and experiences with particular regard for how visual art and film are embedded in social conflict and what the specific challenges in this exciting field are: With Heinz Emigholz, Jasmina Gavrankapetanovi, Adla Isanovi, Nihad Kreševljakovi, Angelika Levi and Claus Löser. Moderator: Stefanie Schulte-Strathaus (Arsenal Theatre)

The division of Berlin into East- and West- sections due to the Berlin Wall (1961-1989) re-defined Berlin’s urban structure and cemented the division of Germany after WWII. Berlin and Sarajevo are therefore examples of political and social change within specific and unusual situations which continue to shape both cities today.

Angelika Levi
Angelika Levi studied 1985-91 at the German Film and Television Academy in Berlin. Since 1985, her film and video works have been shown and received international awards. Besides working on her own projects, she works as a lecturer, editor and dramaturg.

Claus Löser
Claus Löser was born in 1962 in Karl-Marx-Stadt (today known as Chemnitz). Since 1980, he has produced written texts, music and film. In 1995, he received a diploma from HFF Potsdam. Since 1990 he has programmed the Brotfabrik Movie Theater in Berlin. In 1996, he founded the collection “ex.oriente.lux” and published the book Counterparts. In 2009, he was the curator of the film series “Winter Becomes Spring – Films Forsee the Turn” for Berlin International Film Festival. 2009 created the documentary film “Assertion of the Room”. Currently works as film curator, critic and historian in Berli. He is the author of numerous articles and books in addition to working in various committees, juries and professional associations; and teaching. 2011 dissertation.

Heinz Emigholz
Heinz Emigholz, born in 1948 in Achim near Bremen, has worked since 1973 in Germany and in the United States as a freelance filmmaker, visual artist, cameraman, writer, publicist and producer, with many exhibitions, retrospectives, lectures and publications in Germany and abroad. In 1978 he founded the production company Pym Films and in 1984 he began the film series Photography and Beyond. Heinz Emigholz is professor of Experimental Filmmaking at the University of the Arts and a member of the Academy of Arts in Berlin.

Nihad Kreševljaković
Nihad Kreševljaković currently works as director of Sarajevo War Theatre. He has served as the executive producer of the International Theatre Festival MESS Sarajevo, where he still works as artistic director of the “Memory Module” program. He graduated from the University of Sarajevo, where he studied history. He is also a documentary filmmaker. He first became involved in film during the siege of Sarajevo. During and after the war, he worked on various documentary projects and films including “Do You Remember Sarajevo”, “Searching for Land of Freedom” and “From Auschwitz to Sarajevo”. He has also written the scripts for the film “Greta”, “We Light the Night”, as well as texts for books such as “Muslims of New York”, “Survival Map, The Life: The Citizens of Sarajevo”. He is one of the founders of the NGO “VideoArchive—Hamdija Kreševljaković—Library”. He is a former member of the Board of “Art House Cinema” and foundation “Kriterion.” He is also the honorary cultural attache ad interim of the Embassy of the Republic of San Marino in Bosnia and Herzegovina.

Moderation: Stefanie Schulte Strathaus
Film theorist, film and video curator, lives and works in Berlin. Co-Director of Arsenal – Institute for Film and Video Art. Member of the selection committee of the Berlinale Forum, and founder and director of the Berlinale programm Forum Expanded. Curated numerous film programs, retrospectives and exhibitions including the film and lecture series “Who says concrete doesn’t burn, have you tried? West Berlin Film in the ’80s” (2006 with Florian Wüst). Currently director of the project “Living Archive – Archive work as artistic and curatorial practice in the present” at Arsenal – Institute for Film and Video Art. 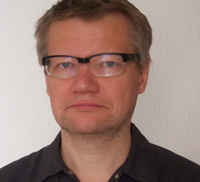 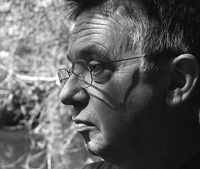 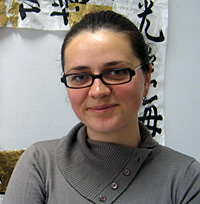 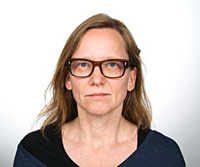